There’s a culture called Steampunk that is dedicated to a revamp of the Victorian age. Typically filled with massive steam powered mechanics and extravagant dirigibles, this classic age is mixed up with fantasy. The steampunk genre includes not only clothing, but music, art, and literature. 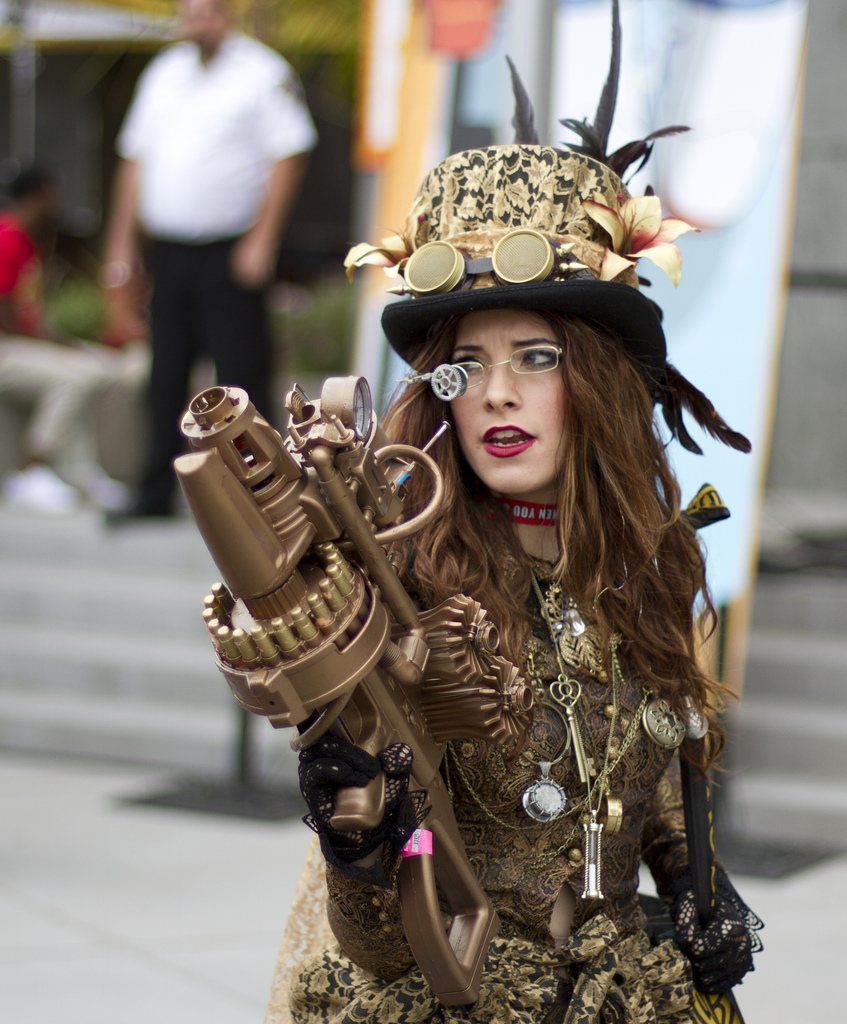 In the fashion industry, steampunk has become a major hit.

Classic steampunk designs including cogs and gears are being incorporated into the clothing lines of various designers.

However, it is in the cosplay scene that steampunk is seen as a growing trend.

Many cos-players get together to wear steampunk costumes, including modified and stylized Victorian clothing, and portray themselves as pirates, adventurers, explorers, and Victorian socialites.

They wear outfits adorned with top hats and goggles, decorated coats, and even mock ray guns! The do-it-yourself community supports steampunk because most steampunk stuff has to be made your self. The aforementioned ray guns are simply modified and painted Nerf or Airsoft guns. Some are even good enough to use wood and metal to build their own ray guns or other accessories!

There is no definitive style of music that is steampunk; rather steampunk qualities can be found in all different artists from all different styles of music, including rock, rap, electronic, and others. Steampunk qualities in rock tend to have dark beats, gritty guitar, and sometimes a hint of folk. A once industrial band named Abney Park proclaim themselves a Steampunk band.

They are influenced by steampunk not only in their music, but in their clothing, design of their instruments, and even the fictional personas that they carry with them on stage. Aside from steampunk rock, there is rap and hip-hop music influenced by steampunk, and usually includes a deep but up-beat bass and lyrics that either depict the life of a mad scientist, or a post-apocalyptic world.

The best example of this is Dr. Steel. He has catchy but heavy-hitting beats, and his stage-persona is of a mad scientist.

Steampunk has been picked up by the art culture surprisingly fast. You can easily find paintings of dirigibles and other flying machines traversing grey skies above vast, desolate landscapes. Such art can be found online, at your local art shows, and in galleries. While the purpose and perspective of such paintings is unlike anything else, the art styles can be very similar to other styles you have seen.

While being dark and dreary, the artwork often depicts a violent sea, a dungeon-like-lab, or a deadend world, sometimes Frankenstein-esque. It is easy to point out anything steampunk inspired because the style is particularly unique compared to others.

There has been a breakthrough in literature within the steampunk culture. H.G. Wells is said to have birthed this trend, along with Jules Verne. The base of the modern steampunk community is based on their inventions, worlds, and knowledge that they depict in their works. First there’s the brass time machine in “The Time Machine”, and then the massive submarine in “Twenty Thousand Leagues Under The Sea,” which were both considered futuristic.

Presently, we would refer to them as retro, regardless of the fact that time machines don’t actually exist. However, both machines seem out of place in such time periods. These ideas have been the driving force for many steampunk fans, and the basis of steampunk.